Activists out in force for IWD 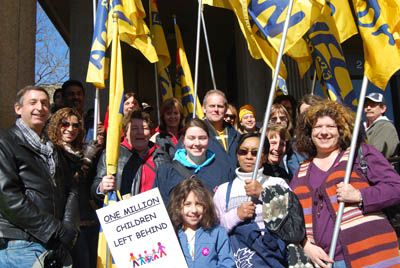 UFCW Canada gold was in abundance at events across the country to mark the 99th anniversary of International Women’s Day (IWD), which takes place on March 8 every year. At one of Canada’s largest IWD events, Toronto’s annual International Women’s Day Rally (held on Saturday, March 6), UFCW Canada activists came out in full force to stand in solidarity with working women and their families and to make a very strong – and loud – statement for equality.

“We still have a long way to go in terms of women’s rights, as the Beijing +15 report shows (DIRECTIONS 10.08-09), but with this level of solidarity and optimism, we will continue to move forward toward a better, fairer day for all women,” says National President Hanley, who led the rally’s largest and loudest labour group.

The massive demonstration commanded the attention of several major media outlets as it rumbled through downtown Toronto, and welcomed the encouragement of smiling motorists who honked their support as they passed the marchers and their families.

A photo gallery of UFCW Canada’s participation in the Toronto IWD march is available at the union’s facebook page, www.facebook.com/ufcwcanada.

Meanwhile, a day later and more than 3,000 kilometres to the west, in New Westminster, B.C., Jaelene and Eva Macallister joined other participants for a UFCW Canada Local 1518 Women’s Committee presentation focused on personal growth to mark International Women's Day.

More photos of that IWD celebration can be found at www.ufcw1518.com.