February 14th Women's Memorial Marches are held annually to honour women and girls who have been murdered or have gone missing in Canada. The first community march was held in 1991 in Vancouver, following the murder of a local indigenous woman in Vancouver's downtown Eastside. Since then, marches have been held annually across the country to call attention to the more than 1,100 murdered and missing indigenous women and girls reported in Canada since 1980. 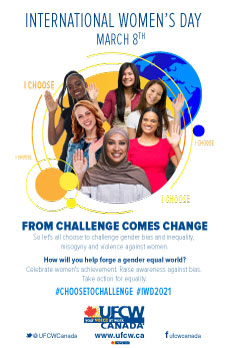 International Women’s Day (IWD) is celebrated annually across the world on March 8. The day commemorates and celebrates the contributions women have made around the globe and calls us to renew our pledge to accelerate gender parity across the country.

Nationally, it arose from the struggles that women faced at the turn of the century, when population growth and a change in working conditions saw many women in the workforce, facing long hours, minimum pay and no right to vote.

International Women's Day is marked with the thousands of events that occur to celebrate the economic, political and social achievements of women.

For more information on some of the events happening to celebrate International Women's Day, please visit www.internationalwomensday.com. 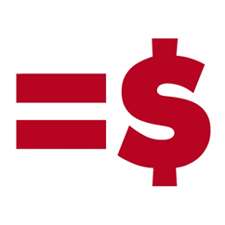 This day marks the additional months women have to work in order to earn the salary men make in one calendar year. In other words, the average Canadian woman will have to work three and a half months into the new year to earn what men do by December 31 of the previous year.

This year's campaign is addressing how the pandemic has had a disproportionately negative impact on women, non-binary and trans people in a way that deepens intersecting forms of discrimination. The campaign is focusing on what demands are needed to ensure that there is an intersectional gender lens to all pandemic recovery planning so it responds to the real impacts.

Use the hashtags #DemandBetter because the recovery needs to build something that is better than what was "normal" before; and #AlwaysEssential because women's paid and unpaid work, lives and equality rights are always essential.

ACTION – make a short video (no more than 60 seconds) identifying what you do, how the pandemic has affected you (at work or personally), and what demand for reform you have that will make a real difference in you life.  Don’t forget to include the hashtags #DemandBetter #AlwaysEssential #UFCWwomen 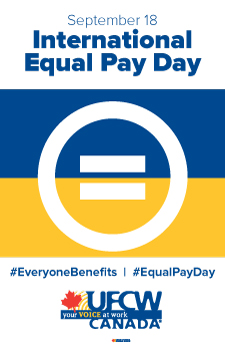 International Equal Pay Day, annually commemorated on September 18, was established in 2019 by the United Nations (UN) General Assembly in response to painfully slow progress on women’s economic empowerment, the undervaluing of work traditionally held by women, and the difficulties in tackling pay inequality around the world.

In establishing International Equal Pay Day as a globally recognized event, the UN General Assembly urged collective action on supporting equal pay for work of equal value as an achievable and worthwhile goal.

Over the last year-and-a-half, the COVID-19 pandemic has pushed women’s participation in the labour force down to its lowest level in three decades. Most job losses have taken place in female-dominated industries, including the accommodation, food services, retail trade, educational services, health care, and social assistance sectors. These realities carry significant economic consequences, and further impact the growing gender wage gap.

So, how can we eliminate the gender wage gap? The following measures would go a long way towards making equal pay for equal work a reality for all:

As we work to recover from the coronavirus pandemic, we must ensure that women’s rights and gender justice are at the heart of our global response. To learn how you can help advance equal pay for equal work, visit UFCW Canada’s Close the Gender Wage Gap campaign. You can also show your support for equal pay by posting about the issue on social media using the hashtags #EveryoneBenefits and #EqualPayDay. 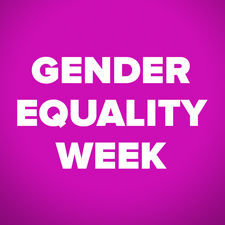 This week is an opportunity for people from coast to coast to coast to celebrate the progress we’ve made in advancing gender equality in Canada, while reflecting on the work that remains to make sure that everyone – regardless of their gender – can reach their full potential.

Throughout the week, show your support with the hashtag #EveryoneBenefits and share why gender equality is important to you. Visit for more information: https://cfc-swc.gc.ca/commemoration/gew-ses/index-en.html. 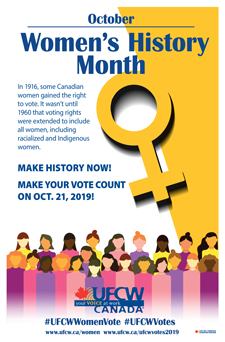 In 1992, October was proclaimed Women's History Month to acknowledge and celebrate the achievements of women throughout Canadian history. October was chosen to coincide with anniversary of the Persons Case, which on October 18, 1929 – through the courage and determination of the Famous Five, the five Canadian women who launched the case – established once and for all that women were "persons" when the Privy Council overturned a Supreme Court of Canada decision and ruled that women were indeed persons, and could become Senators. The ruling not only opened the political doors for Canadian women. It also clearly asserted that women's equality rights in Canada were fundamental.

For additional information on the continued work to end gender inequities that continue to hold women and girls back visit https://www.leaf.ca/ 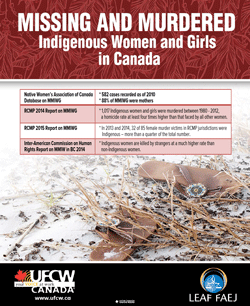 The Sisters in Spirit vigils honour the lives of missing and murdered Indigenous women and girls. It is also a day of support for families who have been tragically touched by the loss of a loved one to violence. Vigils take many forms; rallies, candle-light vigils, workshops, a moment of silence, a walk, or a gathering of people in solidarity to share memories.

November 25 – International Day for the Elimination of Violence Against Women 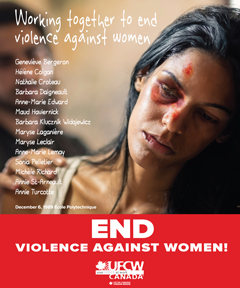 Violence against women is the world's largest and most persistent human rights violation.  Over 50% of Canadian women will experience an incident of violence at some point in their lives, the majority before they turn 25.

We all have a role to play in preventing and addressing gender-based violence, which is why this year's 16 Days theme is #OurActionsMatter. Between November 25 and December 10, we encourage you to join the conversation and reflect on the concrete steps you can take to question, call out, and speak up against acts of gender-based violence.

During this year's campaign:

• On November 25 - the International Day for the Elimination of Violence Against Women, join UFCW Wear purple on November 25 to raise awareness about gender-based violence.

• Add your voice to the growing chorus of survivors, advocates and partners and share what actions you are taking to end gender-based violence using the hashtag #OurActionsMatter #GenderEquality and #16days. 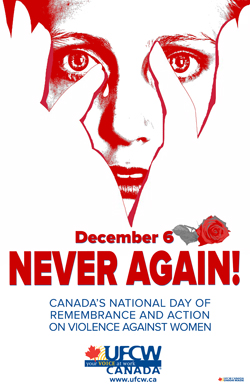 The National Day of Remembrance and Action on Violence Against Women, also known informally as White Ribbon Day, is a day commemorated in Canada each December 6, the anniversary of the 1989 École Polytechnique massacre, in which an armed student, Marc Lépine, murdered fourteen women and injured ten others in the name of "fighting feminism". Canadian flags on all federal buildings – including the Peace Tower on Parliament Hill in Ottawa, Ontario – are flown at half-mast on December 6. Canadians are encouraged to observe a minute of silence on December 6 and to wear a white ribbon (or a purple ribbon) as a commitment to end violence against women.

For more information on violence against women and UFCW Canada materials click here.