KAIROS is "NOT" going away

An open letter to the Right Honourable Stephen Harper, Prime Minister of Canada

As the largest private sector union in Canada, UFCW Canada has worked for many years with KAIROS and has witnessed the tremendously important work they do in Canada and internationally. 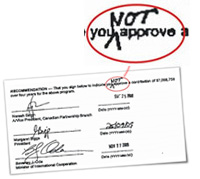 It is shamefully ironic that KAIROS — an organization dedicated to human rights, gender equality, and supporting political freedom — finds itself the victim of political repression here at home at the hands of your government.

Minister Oda’s contempt goes beyond Parliament, CIDA and KAIROS itself.  Her actionsare also contemptuous of the 250,000 men, women and children around the world who look to KAIROS as a Canadian agent for positive change and empowerment.

Minster Oda’s duplicity in this matter and her misleading of Parliament are both indefensible and she should be forced to resign. Anything less sends a clear message to Canadians, and to nations abroad, that forgery and outright lying by a minister are not beyond the boundary of ethics your government is willing to stand by.

As for your position that it is the government’s responsibility “to make sure taxpayers’ dollars are used effectively for foreign aid” — what could be more effective than funding an accomplished agency, respected around the world, as well as by CIDA itself?  This seems to be yet another example of your government basing policy decisions a peculiar ideological framework as opposed to the facts.

CIDA’s recommendations should be followed and KAIROS should be provided the $7 million to continue its vital work for the next four years. That is fair and just, and based on KAIROS’s history, a very effective way to spend on foreign aid.

As for Minister Oda, it is certainly not honorable for her to remain a member of government.