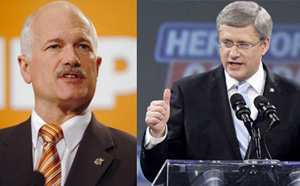 Voters have spoken and the May 2 election will go down in history as one that has changed the face of Canadian politics.

For Stephen Harper and the Conservative Party, they finally attained a majority government. Congratulations are in order for Prime Minister Harper on this victory. But while his party achieved majority status, Stephen Harper must still take into account that 60 per cent of Canadians voted against his party.  We trust he will realize his party may have won a majority of the seats but not the majority of the popular vote and should govern accordingly.

For Michael Ignatieff and Gilles Duceppe it was an election of unexpected results as both leaders saw their parties decimated and on a personal level both were defeated in their own ridings.  Whatever their future may hold, both men should be congratulated.  Although Canadians may not have agreed with their policies and platforms, both were respected parliamentarians who had the utmost respect for the democratic process.

Elizabeth May, leader of the Green Party, also helped to make the election historic by becoming the first  Green Party member elected to the House of Commons. She should be congratulated on her victory as she will bring a fresh voice and new perspective to Parliament.

However, the biggest praise for their election results on May 2, must go to Jack Layton and the NDP.  By winning 102 seats, Layton guided his party to official opposition status for the first time in history.  His campaign was focused on issues that are important to Canadians and his vision for our country had resonance with the electorate.

Congratulations to Jack Layton and the NDP for their historic showing.  With 102 seats in the House of Commons, Jack and the NDP will be a strong voice for Canadian families and an advocate for workers throughout our country.