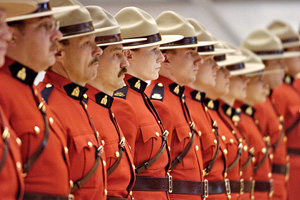 “The Galliford case is a powerful example of why all workers in Canada must have the right to bargain collectively,” says the National President of Canada’s largest private-sector union.

Canada’s largest private-sector union, the United Food and Commercial Workers (UFCW Canada), has joined the growing number of Canadians who are speaking out against the repugnant workplace treatment of Mountie Catherine Galliford, who allegedly endured sexual harassment throughout 16 years of public service as a RCMP constable.

“The Galliford case is a powerful example of why all workers in Canada must have the right to bargain collectively,” says UFCW Canada National President Wayne Hanley. “This is the kind of exploitation and gross mistreatment that can happen at work when a certain group of workers are forbidden by the law from exercising the same rights as everyone else,” adds Hanley, who also provides leadership to the national and international Labour Rights are Human Rights movement as a director of the Canadian Foundation for Labour Rights.

For over 15 years, UFCW Canada has led the fight for migrant worker rights and has tirelessly advocated for the organizing and collective bargaining rights of farm workers, who are glaringly excluded from the Labour Relations Acts of Ontario and Alberta.

“Like agriculture workers, the hard work of RCMP constables makes an essential contribution to Canadian society,” adds the leader of Canada’s largest private-sector union. “It is high time for law makers to accept the irrefutable fact that the best defence against mistreatment in the workplace is a union contract, and to acknowledge the right of every worker to participate in the process that best ensures the respect and dignity they so rightly deserve – that is our democratic right as workers.”

UFCW Canada is Canada's largest private sector union and for more than two decades has led the campaign for enhanced labour, workplace and safety rights for farm workers. The AWA is Canada's largest national agriculture workers organization with more than 10,000 members, and ten AWA centres across the country to serve them.