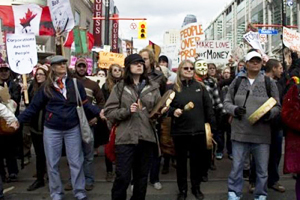 The response of the mainstream media, business class and political establishment to the Occupy movement has been dismissive, patronizing and hostile.

It’s sad. But it’s predictable. And it has been the story of successful progressive movements for the last hundred years.

A powerful elite has been treating our democracy and economy as its own private playground and everyone else and the public interest with contempt.

Some of us have been highlighting the problem for a while. Finally, something clicked. And the Occupy movement sprung up around the world.

There isn’t a specific policy demand or political strategy. That’s not what the movement is about. It’s on a moral mission.

The economic and political system today is rigged against ordinary people who work hard and play by the rules.

It’s this moral failure the movement is emphasizing. They’ve brought two essential things to the table: passion and people.

Change starts with evoking visceral emotions about what is fair and unfair – it doesn’t start with armies of actuaries, squads of statisticians and detailed policy prescriptions.

Change also requires boots on the ground. People need to stand up and fight for what they believe in – as if the cause depends on every one of them showing up, because it really does.

These things have made the movement a game-changer.

It has altered the political debate. It has shifted the discussion in the media. It has changed the conversations on loading docks and around the water cooler.

Recent polling by Nanos Research shows the majority of Canadians believe the overall point the movement is making is very valid.

The issues of economic and social equality – issues ignored by the powerful for a generation – are front and centre once again.

This is a huge victory for the movement. And it follows the best traditions of successful progressive movements.

They started with a small group of people starting conversations in their communities about a moral issue. They brought energy and passion and believed in each other. And put themselves on the frontlines.

And they succeeded only after long struggles and in the face of bitter opposition and sneering attacks from the powerful and privileged.

The Occupy movement is here to stay. It will morph into something else. But it’s not going away until there are serious reforms to our economy and democracy.