“This federal budget, the first budget from the Harper majority government, shows that the Conservatives are clearly out of step with Canadians,” says UFCW Canada National President Wayne Hanley. “Canadians believe that government has a responsibility in addressing income inequality, and cuts to the public sector, cuts to public services and raising the OAS eligibility rates will do nothing to address that inequality.” 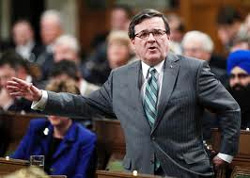 The budget delivered today by Finance Minister Jim Flaherty contained $5 billion in cuts, with sweeping cuts to federal services and public service employees. To address the shortage of skilled workers the government is proposing to allow more skilled workers into the country while restricting the ability of immigrants already in the country to bring their families to Canada.  Although we have witnessed record unemployment since the recession, the lack of a focused job creation program in the budget will do little to address the problems of chronic, and increasing, unemployment, thanks to the 19,200 jobs lost as a result of this budget.  However, combined with previous announced job cuts over the course of the next three years, total job losses will reach 70,000.

Some of the cuts to the public service will be food inspectors, which could impact numerous UFCW Canada workplaces, health care transfer payments to the provinces, the CBC and those who deliver federal services to the most vulnerable and disadvantaged in our society.

“Not only is this government promoting inequality but it is also creating a generational divide pitting younger workers against older workers by increasing the OAS eligibility limit,” says President Hanley.  “The Chief Parliamentary Budget Office has declared Canada’s retirement security is sound, and moving the age to collect OAS from 65 to 67 is not necessary. The furor over Canada’s retirement security programs is nothing more than a false crisis created by the Harper government.”

“Equality and morality should play an important role in developing public policy, but this budget is major step backwards by pitting young against old, one class of immigrant against another, and prosperous parts of the country against those suffering economically.”

For more information on the budget, visit www.policyalternatives.ca