Local 1000A shows its Pride 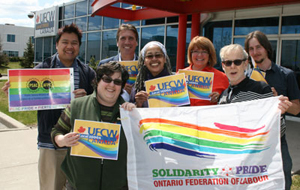 UFCW Canada Local 1000A is proud to announce the launch of its first-ever PRIDE advisory group.

The first meeting was held in mid-April at the Local 1000A office in Woodbridge, Ontario and brought together members and activists of all ages and cultures.

“I’m proud of the major and trendsetting steps that our local union has taken to bring a LGBTQ (Lesbian, Gay, Bisexual, Transgender and Queer) caucus to life,” said Local 1000A activist Paul Cadiente, who works at the Great Food store at Toronto’s Queens Quay.

“Our brothers and sisters in the LGBTQ community need to know they are not alone, that their union will be with them every step of the way to fight for a world free of prejudice and discrimination,” Sawyer said. “We are proud to have started the PRIDE advisory group, and we will work hard to support and celebrate the rich diversity in our communities.”

“It’s a great idea to have a place where members of the LGBTQ community can feel comfortable, and not feel judged for who they are,” said Graticola, a pharmacy technician at an Ottawa Great Food store. “Whether or not someone is out at work, they have the security of knowing if any issues arise in the workplace, their union will be there to represent them.”

Sawyer encouraged members to join Local 1000A on July 1 for the Toronto Pride Parade. Watch our website, www.ufcw1000a.ca, closer to the date for more details.

Last but not least, Local 1000A thanks Naveen Mehta, Director of Human Rights, Equity & Diversity for UFCW Canada, for helping us with this new initiative.