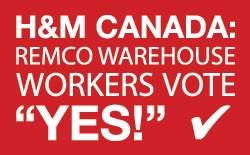 Workers at a warehouse that supplies H&M clothing stores in Canada voted “Yes!” on Wednesday, May 23 to becoming the newest members of Canada’s leading retail, food and commercial workers’ union, UFCW Canada.

The victory by the warehouse workers comes on the heels of two historic organizing wins at H&M retail locations in Mississauga, Ontario and Joliette, Quebec.

The new Remco members will join their H&M Sisters and Brothers from the Mississauga Square One location as proud members of UFCW Canada Local 175, the country’s largest local union.

The Brampton facility is devoted exclusively to supplying H&M stores, and employs about 70 workers.

“The success really shows how strong people can be in their determination,” says UFCW Canada national representative Kevin Shimmin, who assisted the Remco workers with their successful campaign. “My hat is off completely to the workers themselves. They were the ones at the end of the day who built this whole campaign.”

The workers were inspired to seek unionization in a bid to lift wages, secure overtime pay and receive recognition for seniority, says Brother Shimmin.

Remco has more than 550,000 square feet of warehousing space in Montreal, Toronto and Vancouver, where it operates the other distribution warehouse that supplies H&M stores in Canada.