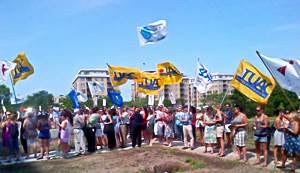 On June 6, staff, officers and activists from UFCW Canada local unions in Quebec joined other local unions affiliated with the Fédération des travailleurs et travailleuses du Québec (Quebec Federation of Labour) to show their support for workers on strike at the Commission de la construction du Québec (CCQ). The 600 workers, who are members of Canadian Office and Professional Employees Union (COPE), have been on strike for more than a month in the wake of demands from the CCQ for a 15% wage cut and other concessions.

Strikers and their supporters chanted and banged on pots and pans outside the Montreal head office of the CCQ which is located directly across the street from UFCW Canada Local 500.  “With the attacks that the unions are suffering right now, it is important that we show our support and our solidarity," said UFCW Canada Local 500 President Antonio Filato. "We must stick together because that is what employers do. We are proud to be here to help our brothers and sisters from COPE.”

Three complaints that were filed by COPE under Quebec anti-scab legislation have all been upheld by the Commission des relations du travail (Quebec Labour Board). A complaint is also currently in front of the board alleging that the CCQ is bargaining in bad faith.