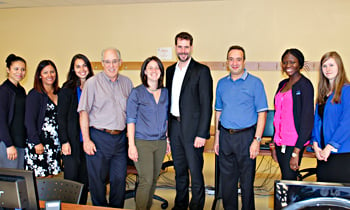 Montreal – September 3, 2014 – Canada’s leading union for private sector workers recently welcomed New Democratic Party (NDP) Members of Parliament to our Quebec Food and Commerce Training Centre in Montreal. The Training Centre was founded in 2005 by UFCW Canada Local 500, with the mission of offering vocational training for established workers and those returning to the labour market, as well as a focus on new immigrant workers and young people seeking to balance part-time work with their studies.

The Training Centre offers a variety of courses to both Local 500 members and non-union workers in the food and retail sector including skills development, language classes, and labour studies. During the visit, Alexandre Boulerice, MP for Rosemont—La Petite-Patrie, and Rosane Doré Lefebvre, MP for Alfred–Pellan, attended various workshops. The MPs were joined by Antonio Filato, President, and Alain Lachaîne, Secretary-Treasurer of the UFCW Quebec Provincial Council, as well as Léo Lavoie, the Coordinator of the Training Centre, and Assistant Coordinator Valérie Robert.

In Quebec, the NDP is closely linked with the labour education of UFCW Canada members, with Local 500 stewards often participating in workshops together with MPs and party members. This gives them the opportunity to exchange information and explore workplace issues as they relate to politics. This fall, Local 500 is launching a new course on political action and unionism, which will no doubt further enhance the NDP’s involvement in labour education.

The UFCW Quebec Provincial Council would like to thank Brother Boulerice and Sister Doré Lefebvre, as well as the NDP, for their time, interest and involvement with our members.