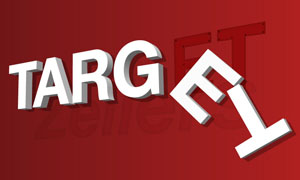 Toronto – September 24, 2014 – To date, American retail giant Target has reported a loss of almost $1.6 billion from its train wreck of an expansion into Canada. Ignoring the advice of industry pundits and retail experts, Target opened 124 new stores in Canada at break-neck speed, refusing to honour the jobs of more than 20,000 former Zellers workers in the process. The end result left disappointed shoppers scratching their heads, employees with less hours and no job security, and shareholders demanding blood.

Yet, it was not so long ago that Target was telling anyone who would listen that its Canadian stores were going to make everyone rich. “We continue to expect to generate far more cash than we need to invest in our business, giving us the opportunity to return billions to our shareholders,” said John Mulligan, Target’s Chief Financial Officer. That was Target’s second-in-command, only a year ago, assuring shareholders that everything was under control in Canada, that consumers were lapping it up at the checkouts, that nobody in Canada cared about the company’s labour relations practices. Of course, nothing could be further from the truth.

During the first few months of Target’s venture into Canada, the company made a quick buck – to the tune of $86 million. But this was apparently not enough to satisfy corporate greed. Target began slashing the hours of its Canadian employees – sometimes by as much as half. Suddenly, retail workers who had worked at Target for mere months were being reduced from full-time to part-time. Adding insult to injury, the company continued to open brand new stores – hiring new employees – while continuing to cut the hours of existing staff.

When Target began cutting hours, company executives attempted to portray the cuts as something which was in the best interests of consumers. Again, this was not the case. Shoppers began to find empty shelves and not enough staff – unique features of Target stores in Canada which continue to this day. The cutting of hours was clearly in the name of profit, not in the interests of people.

Back to Mulligan, Target’s executives originally claimed the company’s Canadian operations would garner a hefty profit by the end of 2013 – an assertion which Moody’s investment group called “unrealistic”. Sure enough, Target Canada ended up reporting a loss of $941 million at the beginning of 2014. The dream was over – Target CEO Gregg Steinhafel resigned and Tony Fisher, the company’s president of Canadian operations, was fired. Shoppers were unimpressed and workers were left empty-handed.