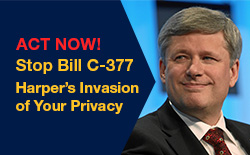 Back in June 2013, the Senate made major amendments to the bill that removed some if its most controversial parts. Many Senators realized that the bill was an invasion of privacy, undemocratic, infringed on provincial governments jurisdiction over labour issues, and is likely unconstitutional. But before the bill as amended made it back to the House, Harper prorogued Parliament which meant the bill would go back to the Senate in its original form.

Conservative senators are now restarting debate on the bill but this time they are doing so at the same time as they are moving to change the rules in the Senate. A Conservative-dominated committee has issued a report recommending that private members' business be subject to time allocation to limit debate. This is a departure from the long-standing practice of applying time limits to only government business. Such rule changes in the past would be done via consensus but Conservatives are no longer following that long-standing practice either.

NDP leader Tom Mulcair made the point that all this shows is that Bill C-377 is really government business disguised as a private member's bill, and such limits to debate being proposed by Conservative senators make a mockery of any notion that senators are independent.

With the bill back in the Senate, it is time once again to put pressure on senators to oppose this unconstitutional piece of legislation and to oppose attempts to further limit debate by departing from long-standing practices and imposing time allocation.

If Conservative senators are now going to limit debate on private members' business, then the Senate becomes even more unnecessary and should be abolished.

Please send a message to the members of the Senate expressing your concerns about Bill C-377 and the Conservatives' attempts to limit debate.

Stop Bill C-377 by clicking on your province to send a letter to YOUR Senator.