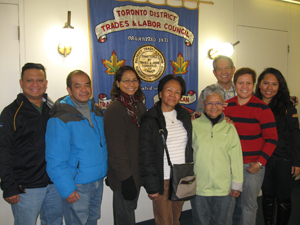 Toronto – November 24, 2014 – In spirit of solidarity and community development, Filipina/Filipino-Canadian union members and community organizers from the Greater Toronto Area have come together to form the Filipino Workers’ Network. Supported by the Toronto Labour Council, this group of workers and activists, including UFCW Canada national representatives Alex Banaag and Zenee May Maceda, meet to support each other in their labour activism by sharing strategies to engage workers to be more active members, and in finding ways to positively change the way people think about unions.

In recent years, Philippine-born individuals have become the largest group of immigrants being admitted into Canada. Many find themselves in precarious working conditions, resulting in the further disenfranchisement of Filipina/Filipino immigrants. For many of these workers, unions have been able to assist them in negotiating collective bargaining agreements — including breakthrough UFCW Canada local union contracts which at some locations provide a pathway to permanent status for temporary foreign workers. As such, the work of the Filipino Workers' Network is focused on encouraging solidarity between union members, and in pushing the continuation of the rich Philippine history of activism in the workplace.

By sharing with one another their experiences in community building, the members of the Filipino Workers’ Network are tapping into their networks and communities in the concerted effort to build a strong workers’ movement.