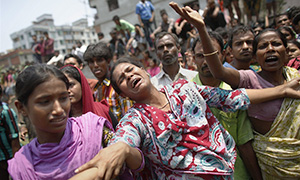 Toronto – February 10, 2015 – UFCW Canada is calling on all activists to tell Benetton – the giant fashion company – to pay its fair share of financial compensation to the Rana Plaza victims and their families.

When an eight-storey sweatshop in Bangladesh collapsed two years ago, 1,134 people died and thousands more were injured. Out of the horror, the UN set up a ground-breaking compensation plan called the Rana Plaza Arrangement. The Loblaw Companies was one of the first to sign on, and other labels that source clothes from Rana Plaza have followed.

But billion-dollar Italian clothing giant Benetton refuses to compensate the victims who made their clothes. It’s the only major global brand with undisputed links that hasn’t contributed. So far, they’re ignoring survivors and will get away with it unless it impacts their reputation.

Take action. Sign the petition, and tell Benetton to join the Rana Plaza Arrangement, so survivors of this horrific disaster receive full compensation.