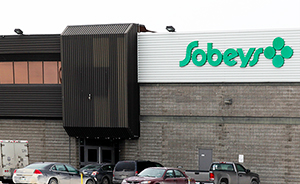 Winnipeg – February 23, 2015 – UFCW Canada Local 832 members at the Sobeys Distribution Centre in Winnipeg have overwhelmingly ratified a new five-year collective agreement. The members were certified as a new Local 832 bargaining unit late last year. The 120 members at the distribution centre will see wage improvements of 10 per cent over the next five years, including a shift premium for evening work. The members will now be able to bank overtime, and have double-time pay for long periods of overtime.

UFCW Canada Local 832 President Jeff Traeger, who was the lead negotiator on this new agreement, was pleased with the gains made for the members. “What was important to the members was to get their rights in a collective agreement that gave them security at the warehouse. We were able to achieve this, along with getting strong wage increases and job security for the members,” said Brother Traeger.