Budget balances the needs of the 1% against everyone else 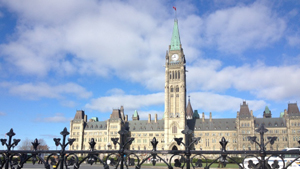 "At a time when Canadians are struggling to find good paying jobs, more seniors are living in poverty, and while high unemployment persists, Harper's Conservatives introduced a budget more concerned with the continued gutting of services in order to squeeze out a balanced budget to bolster their re-election campaign.

Instead of addressing serious problems like a stalling job market, record levels of household debt, inadequate employment insurance benefits and lack of retirement security, the Conservatives are fixated on austerity measures in their drive to a balanced budget, regardless of who may suffer.

UFCW Canada members, like all Canadians, are worried about their future and with good reason. More than 2.8 million Canadians are unemployed or underemployed. In the past five years, more than three-quarters of the jobs created have been precarious, part-time or temporary, so many Canadians require multiple jobs just to make ends meet. Today's budget did little to address these issues, nor did it provide any insight on a job creation strategy for the country.

Instead, the Harper government continues on a path to eliminate good jobs having already cut 26,000 positions in the public service since 2010, and on track to cut 35,000 jobs by 2017.

There is a huge income inequality gap in Canada today and it looks as though it will once again go unaddressed with today's budget. The Conservative government continues introducing tax measure such as income splitting, that only line the pockets of the very rich. That scheme alone will cost the government more than $2 billion a year - money badly needed for social programs and transfers which are crucial in a fair society, such as OAS, child benefits, and social assistance, which provide greater income security to all working Canadians.

Harper's government had a choice in this budget. They could continue to play cynical political games to balance the budget in time for the 2015 election so they could once again throw around small incentives that sound greater than they really are.

Or they could have invested in the expansion of a more sustainable economy, productivity, training, and helping to create good jobs while ensuring Canadian workers would have income security today and in the future.

As usual, Harper chose political games over the needs of Canadians."