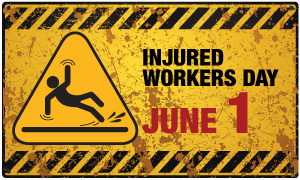 Toronto – May 28, 2015 – Every year on June 1, Ontario Injured Workers Day, Ontarians pay respect to the thousands of workers who have died or been injured in the workplace. It is also a day to call for action from government and employers to ensure that workplace safety is paramount.

While the most recent death and injury statistics published by Ontario's Workplace Safety and Insurance Board (WSIB) might lead you to conclude that the avoidable tragedy of workplace death and injury is on the decline, the numbers are deceiving. The reported numbers of deaths and injuries have fallen over the past few years, but this coincides with a period where many Ontario workers have become jobless, and with many jobs eliminated in sectors particularly linked to workplace accidents such as heavy manufacturing and the resource sector.

Indeed, despite an overall decline in worker deaths and injuries in Ontario, this year we have seen a number of tragic and preventable worker deaths throughout the province, from Nanticoke to Markham to Timmins.

What the WSIB numbers also disguise are worker deaths and injury caused by exposure to workplace toxins and other long-term health hazards. Studies indicate that, within Ontario, roughly 6,000 workers' deaths a year are the direct result of such exposure, while the WSIB numbers claim the number is less than 300.

The supposed decline in workplace claims also coincides with an increasingly adversarial WSIB regime that discourages workers from pursuing claims. Benefit cuts and changes to policies and practices have caused immense poverty, and have made the workers’ compensation system hostile to injured workers – the very people the system is supposed to protect. As well, about 40 percent of Ontario workers are employed in jobs that are not covered by WSIB – including the agriculture industry, which has one of the highest injury rates of any sector in the economy.

June 1, Ontario Workers Day, is an annual reminder that every worker has the right to a safe and healthy workplace, but shamefully thousands of workers and their families continue to be the victims of a business culture that regards health and safety as burdensome costs to the bottom line. The only thing that can change this mindset is stricter enforcement and inspection under Occupational Health and Safety (OHS) legislation, a more just WSIB system, and prosecution of employers who ignore their safety responsibilities. The laws exist, but they must be enforced.

UFCW Canada activists are invited to show their solidarity with injured and killed workers in Ontario by participating in a rally that has been endorsed by our union, as well as other labour and community allies. The Injured Workers' Day Rally and March will be held at 11 a.m. on June 1 at Queen's Park in Toronto. For more information about the rally, click here.