As Walmart strikes go viral in the US, Canadian ‘Associates’ have “plenty of reason to be inspired,” says Canada’s leading retail workers union 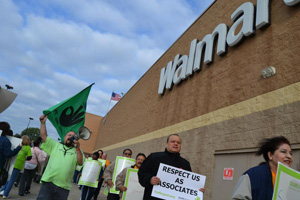 TORONTO – Canada’s leading retail union reports that Walmart workers in Canada have plenty of reason to be inspired by the Associate uprising currently taking place in the United States that involves striking workers at a growing number of Walmart locations across the country.

As investors gathered in Bentonville, Arkansas for Walmart’s annual shareholder meeting, workers at 28 Walmart stores in 12 different states walked out and went on strike to demand the anti-union employer raise wages, improve working conditions and end retaliations against employees who attempt to form unions.

“Walmart workers in Canada can certainly relate to the disappointment, frustration and need for action we’re currently seeing in the US,” says Wayne Hanley, the national president of Canada’s largest private-sector union, the United Food and Commercial Workers (UFCW Canada). “Walmart has a long, notorious history of violating its Canadian employees’ rights, and since it came to Canada the retailer has become, without question, one of this country’s most socially irresponsible employers.”

For example, Walmart’s 2006 decision to close a store in Jonquiere, Quebec after the workers there decided to join the union drew condemnation from people around the world. Four years later, the rights of Walmart Tire & Lube workers in Gatineau, Quebec were also stifled by their employer after Walmart decided their union contract didn’t fit with its “business model.” Examples of Walmart’s war on the rights of Canadian workers can also be found in communities like Weyburn, Saskatchewan where the retailer has spent the last eight years trying to stall and frustrate the collective bargaining process.

Most recently, Walmart has joined Target in firing more than 10,000 Zellers workers and refusing to respect their experience, loyalty and labour rights.

“All of this from an American company that is raking in $16 billion a year in profit, and whose executives made more than $10 million each in compensation last year.  Plus, the four family members who basically own Walmart have more wealth than the bottom 42% of American families combined,” adds Hanley. “The greed and corruption that has become Walmart’s true global brand must stop and it must stop now,” says Hanley making reference to the corporation’s behaviour in Canada and around the world, which most recently includes the alleged bribery scandal in Mexico and yet another gender discrimination lawsuit, this time on behalf of 100,000 women in California and in Tennessee.

“Making change at Walmart here in Canada and around the globe starts with all of us gaining inspiration from the courageous actions of the striking Walmart workers in the United States,” says Hanley. “Only then, will Walmart become the socially responsible corporation and employer that a better, fairer world needs it to be.”