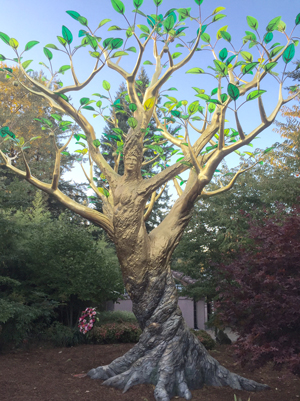 The Golden Tree Monument to Migrant Farm Workers is a beautiful seven-meter monument that honours the three women who died in the tragic crash. The monument also recognizes the essential contributions that migrant farm workers make to Canadian society, and serves as a crucial reminder of the need to improve health and safety standards in the agricultural industry.

Stan Raper, the National Coordinator for the AWA, also attended the unveiling and had the following to say:

"Tragedies such as this remind us that the fight for justice for migrant workers – who are some of the most vulnerable workers in Canada – is not over. The struggle to improve living and working conditions for migrant workers, particularly those in the farming industry, will continue until these types of tragedies no longer happen, and until we achieve fairness in the workplace for all migrant workers."

As the first monument in Canada that recognizes the important contributions to society that migrant farm workers provide, The Golden Tree is a significant historical achievement, and UFCW Canada is proud to have played a leading role in its creation. To find out more about the monument, visit The Golden Tree website.