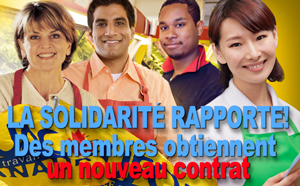 Thunder Bay, Ont. – October 31, 2015 – UFCW Canada Local 1000A members at the Real Canadian Super Store in Thunder Bay, Ontario have ratified a new contract that brings many gains to members, including wage increases and language improvements.

The new five-year agreement covers more than 300 UFCW Local 1000A members at the store.

Workers going into the new part-time wage grid will also see immediate increases, and all those making above minimum wage will receive an additional increase each year the minimum wage goes up.

The contract also features new language for workers in the "Click and Collect" department, as well as improved language for new member orientation to ensure new hires are advised of their rights and protection under their collective agreement.

"On behalf of Local 1000A, I want to congratulate our union negotiating committee for their excellent work, and our members at Thunder Bay Real Canadian Superstore for showing tremendous solidarity in working together to achieve a fair contract for their future," said UFCW Canada Local 1000A President Pearl Sawyer.