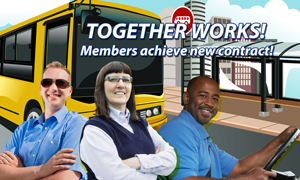 The new agreement covers bus drivers and operators at the school division. Winnipeg School Division is the largest of the six public school divisions in Winnipeg, consisting of 77 schools, which collectively teach over 33,000 students.

During the life of the four-year agreement, wages for the bus drivers will reach parity to other school bus drivers in the city.

"One of the main reasons for this increase is to bring the bus drivers' salary in line with the rest of the sector," said UFCW Canada Local 832 Secretary-Treasurer Beatrice Bruske.

The new collective agreement also contains improved language to vacation and statutory holiday pay, as well as sick leave benefits. School bus drivers will now also be paid a daily minimum for regular run assignments. A new article dealing with work assignments has been added to the agreement, which states where possible, seniority shall be the governing factor in matters related to the assignment of regular routes and field trips not part of a regular route.