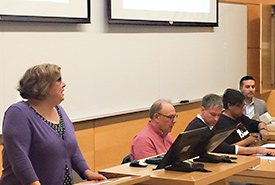 Toronto – November 16, 2015 – UFCW Canada joined graduate students at a recent Toronto symposium that focused on the role of academics in helping to build the labour movement.

The Academic and Workers' Movements symposium at Toronto's York University was organized by the university's Global Labour Research Centre. It was the first-ever symposium of its kind, with panel discussions on topics such as discourse on marginalized workers, the strategy and politics of labour, and  work and migration. The conference also showcased graduate student research and took an interdisciplinary approach to advancing social justice and economic issues affecting Canada.

"It goes without saying that our long history of working with students, researchers, and academics is fundamental to the work of social justice and the labour movement," says Naveen Mehta, UFCW Canada Director of Human Rights and General Counsel. Brother Mehta was a member of a panel discussion on building stronger bridges between the labour movement and labour.

"With such a solid evidentiary base provided by social and economic justice-based academia, the labour movement is able to base its planning, strategies, and program implementation in a way that best supports working people. I look forward to greater, mutually beneficial initiatives in the future," adds Brother Mehta.

For more information on the Global Labour Research Centre, please visit their website.