By the Numbers: Employment in Canada still in slow-motion recovery

Ottawa – November 24, 2015 – Despite recent job gains in October, a temporary lift boosted in part by the federal elections activity, the economy is still slowly climbing out the recession, according to data released by Statistics Canada. Another release by the Canadian Centre for Policy Alternatives (CCPA), stipulates that the unemployment rates remain above pre-recession levels, job growth remains slow in most provinces and youth unemployment continues to be at high levels.

Prince Edward Island came in second with an unemployment rate of 9.9%, followed by New Brunswick at 9.0%, and by Nova Scotia at 7.8%. None of these provinces have returned to pre-recession unemployment levels.

At the other end of the spectrum, Manitoba’s 5.3% unemployment rate was the lowest in Canada, followed by Saskatchewan with a rate of 5.6% and British Columbia with an average of 6.3%. 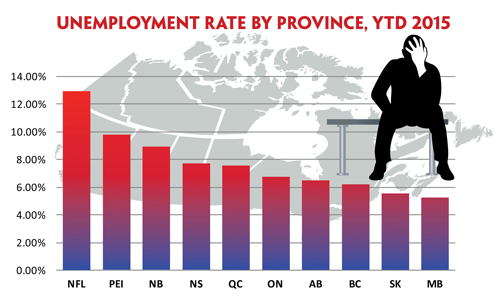 New Brunswick had the highest unemployment of all provinces with a rate of 17.4%, an almost 50% increase since 2007, the largest one in Canada.

Nova Scotia came in a close second with a high unemployment rate of 17.0%.

Although Newfoundland and Labrador is the only province with a lower youth unemployment rate when compared to 2007, in October it still registered a high rate of 13.7%.

Every other province shows worse rates of unemployment now than before the recession. 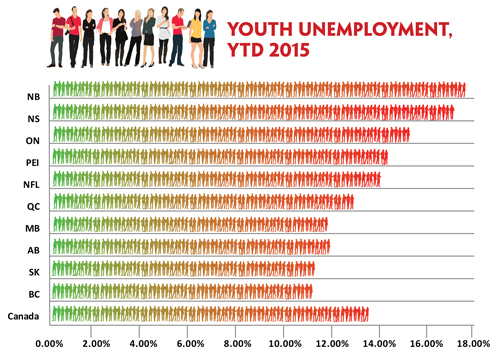