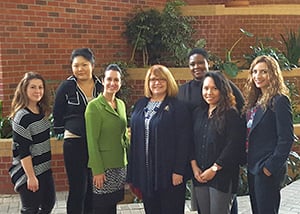 Toronto – December 12, 2015 – UFCW Canada activists recently participated in the Ontario Ministry of Labour’s Gender Wage Gap Strategy consultation in Toronto. The mandate for the government's Gender Wage Gap Steering Committee is to identify and assess factors that contribute to the gender wage gap in Ontario, and make recommendations for closing the gap going forward.

The good news, according to Sister Samuels, is that "unionization is a key part of the solution in closing the gender wage gap, and having representation in the workplace provided me with the support that I needed, as well as access to better wages."

Local 1000A President Pearl Sawyer also participated in the consultation by discussing how domestic violence is a pressing issue in the workplace, often causing women workers to leave their employment more frequently and earn less money than men. As well, victims of domestic violence are more likely to work in part-time, precarious jobs than male workers, she noted.

"In Australia, many unions have negotiated up to 10 days of paid leave for those who identify as being victims of domestic violence," Sister Sawyer said. "This paid leave provides the worker time to relocate, attend counselling or legal appointments, or relocate their children to a different school. It also helps workers who are victims of domestic violence remain employed," she added.

Sawyer then spoke about the types of changes we need to see in the workplace and at the legislative level in order to close the gender wage gap and help Ontarians stuck in precarious work.

"The retail sector has a disproportionate rate of part-time work. A longer notice period for work schedules and guaranteed hours are critical for stabilizing work for these workers. In addition, ensuring that a certain percentage of scheduled hours are devoted to full-time jobs would help to close the gender pay gap for many workers in the retail sector."

Following Sister Sawyer's remarks, UFCW Canada National Representative Zenee Maceda spoke about increasing the minimum wage as another means of helping to reduce the gender wage gap. Sister Maceda referred to the decision of Cambridge, Ontario, which recently became the first municipality in the province to pay its employees a living wage of $16.05 an hour.

UFCW Canada National Representative Emmanuelle Lopez then spoke about the challenges of finding child care as a working parent in Ontario, and how this issue can contribute to wage disparities between women and men. "If somebody needs a flexible work schedule, they should have that option," Sister Lopez told the consultation.

Finally, UFCW Canada's Coordinator for National Strategic Campaigns, Debora De Angelis, addressed the current certification process in Ontario and explained how it negatively affects women when employers threaten, coerce, or fire them in the lead-up to a certification vote.

UFCW Canada was also joined by York Labour Studies students Kate An and Fiden Topyuvek at the consultation, which was well-attended by other labour and community activists. For more information about the ongoing Gender Wage Gap Steering Committee consultations, please contact Debora De Angelis at debora.deangelis@ufcw.ca.