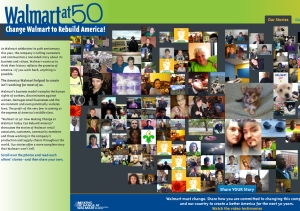 Despite Walmart’s best efforts, a new website called walmartat50.com will continue rallying people online to urge Walmart to become a socially responsible employer. As Walmart celebrates its 50th anniversary this year, the company is telling customers and communities a one-sided story about its business and values.

In response, walmartat50.com, launched by Making Change at Walmart, showcases the real stories of Walmart retail associates, customers, community members and those working in the company’s production and supply chains throughout the world, which offer a more complete story that Walmart won’t tell.

This latest freedom of speech win for Walmart workers, supporters and their communities, follows a similar victory in 2010, when the company tried to force an injunction against the Walmart Workers Canada website.

To find out more about the Making Change at Walmart campaign, go to www.makingchangeatwalmart.org.