How you can help the workers at Covered Bridge Potato Chips 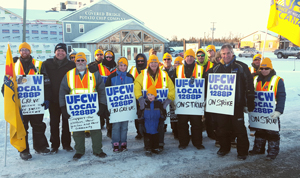 Hartland, N.B. – January 19, 2016 – Members on strike at Covered Bridge Potato Chips are holding strong, as two replacement workers walked out of the factory to join the picket line, and thousands of messages of support continue to pour in calling for a fair first contract.

The members were forced on strike on January 5, after the company continued to refuse bargaining a first contract with a living wage, and basic workplace rights including seniority. The members voted to join the union more than two years ago. Since then, the provincial labour board has ruled the company violated the Labour Act five times, and ordered Covered Bridge to stop intimidating union supporters, and to get back to the bargaining. The employer’s last offer before the strike was worse than the first offer a year ago.

“All we’re asking for is a fair first contract,” said Betty Demerchant, who along with her union brothers and sisters have picketed from sunrise to sundown every day, undeterred by the frigid temperatures. “We’re proud that people like the chips we make,” says Betty, “but for now, we’re asking folks not to buy Covered Bridge potato chips – not until the owners get back to the bargaining table and negotiate a fair first contract.

Over the last five years, Betty saw a raise of just ten-cents-an-hour, and most of the workers are paid minimum age. Meanwhile, the growing company recently received more than $700,000 in government grants to help the owners expand their factory. But for now, the impact of the strike has cut production at the plant in half.

You can help to bring justice to workers at Covered Bridge Potato Chips. Send a message to the company to get back to bargaining a fair contract. Click here.