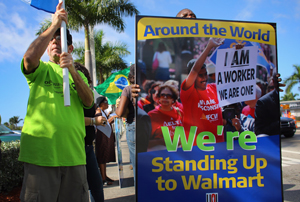 Lancaster, Texas – January 29, 2016 – The United States National Labor Relations Board (NLRB) has ruled that Walmart unlawfully retaliated against 16 workers who participated in strikes in 2013 and ordered the company to reinstate the workers and make good on their lost wages.

The NLRB judge found that Walmart broke the law when it fired 16 workers who went on strike in June 2013 and traveled to the company's headquarters in Bentonville, Arkansas to stage a protest at the company’s annual shareholders’ meeting.  Walmart argued that the firings were legal because the workers' absences weren't excused.

The ruling, handed down on January 21, also ordered Walmart to hold meetings in over two dozen stores to inform workers about their legal rights to organize and to strike under U.S. labour laws, and the prohibitions against reprisals or retaliation by their employer.

"Today's decision proves beyond doubt that Walmart unlawfully fired, threatened, and disciplined hard-working employees simply for speaking out," says Jess Levin, communications director for Making Change at Walmart – a UFCW-backed advocacy group for Walmart workers. "Not only is this a huge victory for those workers and Walmart workers everywhere who continue to stand up for better working conditions, but it sends a message to Walmart that its workers cannot be silenced. We will continue to fight to change Walmart for the better."

The ruling came just one day after Walmart announced that it was raising wages for 1.2 million U.S. workers in 2016 as part of a $2.7 billion investment over two years in wages and training amidst pressure from labour groups such as Making Change at Walmart to invest in workers and to pay living wages.