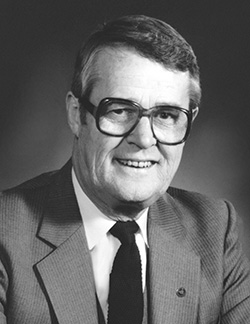 Toronto – February 10, 2016 – UFCW Canada is mourning the loss of retired International Vice President Frank Benn, a great UFCW Canada builder and leader, who passed on February 3rd at the age of 90.

Brother Benn’s activism in the union began in the 1940s soon after he started working at Canada Packers in the Toronto Junction. From the floor as a rank-and-file activist, Frank served his fellow workers and union members as a steward and unit chair until the 1950s when he became a full-time union representative for the United Packinghouse Workers.

Throughout the 1950s, 60s, and 70s, Frank played a key role in advancing the living standards of the membership through strengthening the chain bargaining system for the packinghouse industry, and assisting with monumental mergers like the United Packinghouse Workers and the Amalgamated Meat Cutters in 1968, and then the Retail Clerks and Amalgamated Meat Cutters in 1979, which achieved the creation of the UFCW.

In addition to leading significant bargaining gains for workers in the Canadian packinghouse industry, Brother Benn was also instrumental in helping thousands of fishery workers to join the organization.

From 1979 to 1983, Frank helped lead the newly formed UFCW as the Assistant to the Director of Region 18, and from 1983 to 1986, Brother Benn served as the Director for Region 18, which ultimately merged with Region 19 to create UFCW Canada.

As Region 18 Director and International Vice President, Brother Benn led the union through one of Canada’s most historic work stoppages: the Gainer’s strike, also known as the “Battle on 66th Street.”

The experience of the Gainer’s Strike led to the formation of Canada’s leading strike and lockout resource: the UFCW Canada National Defence Fund (NDF), which today includes tens of thousands of UFCW Canada members working in many core sectors across the country.

Frank is survived by his wife and children, including UFCW Canada Local 1000A Secretary-Treasurer Kevin Benn. The family will provide any details regarding a celebration of life at a later date.