By the Numbers: Canadian Well-being Index, quality of life declining

What is Wellbeing? – The presence of the highest possible quality of life in its full breadth of expression, focused on but not necessarily exclusive to: good living standards, robust health, a sustainable environment, vital communities, an educated populace, balanced time use, high levels of democratic participation, and access to and participation in leisure and culture. (definition by the Canadian Index of Wellbeing)

A second report, titled How Are Canadians Really Doing?, recently released by the Canadian Index of Wellbeing, shows that the recession didn’t hurt only the economy but it also damaged our health, and overall reduced our quality of life.

The GDP alone can’t measure how well Canadians are faring. During the recession (2008-2010) the standard of living for Canadians decreased by 10.4%, mainly due to reduced levels of economic security, the increased number of people out of work or working temporary, part-time, precarious jobs, and a general lower level of quality of employment. 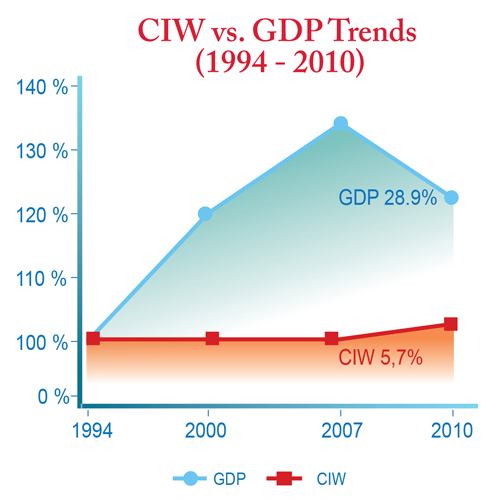 Following the 2008 recession the GDP dropped 8.3% with slight signs of recovery by 2010, while the CIW declined a stunning 24% with no sign of recovery.