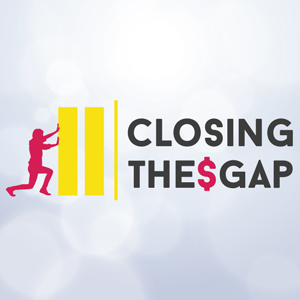 Toronto – March 31, 2016 – It's no April Fool's joke: women in Canada still make 30 per cent less than men in non-union workplaces. To combat the gender wage gap, UFCW Canada is launching an innovative new campaign to bring awareness to the gender wage gap issue. Closing the Gap aims to highlight the union advantage when it comes to the fight on gender wage inequality, featuring UFCW Canada activists telling their stories of how their union is helping women overcome the gender wage gap.

While a new survey released by recruiting website Glassdoor reveals that a majority of employed adults believe that men and women are paid equally for equal work at their companies, the facts tell a different and discriminatory story.

In Canada, recent studies have shown that non-unionized women who work full-time still earn on average 73.5 cents for every dollar men make, a number that has barely risen from 72 cents in 2015. These numbers are significantly lower for Indigenous women and women of colour. Some studies also have determined that the gender wage gap in Canada is more than twice the global average, noting that the Canadian pay gap is on average $8,000, while globally it's at $4,000.

The most effective way to combat gender wage inequality is through a union contract. International research has consistently demonstrated that the best way to resolve the issues workers face is by protecting their right to organize. In 2013, 32.6% of Canadian women workers were unionized. On average, they earned $6.89 per hour more than non-union women because of their union negotiated contract. According to statistics from the Canadian Labour Congress, the fair wages and work hours that unions negotiated delivered nearly $574 million more every week into local economies across the country through better paycheques for working women.

UFCW Canada is proud to be a part of the fight for income equality. As Canada's most progressive private-sector union, UFCW Canada has participated in government consultations regarding the gender wage gap, most recently at the Ontario Ministry of Labour's Closing the Gender Wage Gap Strategy consultation. To learn more about UFCW Canada's advocacy efforts for women, visit ufcw.ca/women.