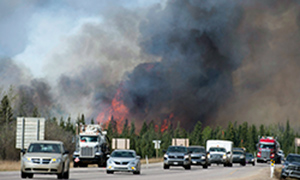 The fires in Fort McMurray and the Wood Buffalo Region have impacted hundreds of UFCW members, including UFCW Canada Local 401 staff who fled the Union’s office in Fort McMurray when the mandatory evacuation was called.

“Local 1118 President Peter Frost and I have been in touch with UFCW Canada Local Unions throughout Canada and the U.S., seeking assistance for our members in Fort McMurray,” said President O’Halloran. “I’m happy to report that in just two days we were able to raise $750,000, and it is our goal raise more than $1 million in relief assistance.”

The two Alberta UFCW local unions will be working in conjunction with UFCW Canada to set up criteria and guidelines for how money will be dispersed to members in the area. A rigorous tracking of how the resources are distributed will ensure that all monies raised go toward helping Local 401 and 1118 members in the Fort McMurray and Wood Buffalo area.

“We are heartened by the tremendous response to Local 401 and Local 1118’s fundraising efforts,” says UFCW Canada National President Paul Meinema. “UFCW Canada and its Local Unions are resolved to stand with our Alberta brothers and sisters until the goal is achieved. From coast to coast, the UFCW Canada family is ready to help, now and in the weeks and months to come.”

Once access to the town has been granted and it is safe to return, the UFCW Canada Local 401 office in Fort McMurray will be re-opened as a resource centre where UFCW Canada members can register for relief assistance and access the immediate help they need to start the recovery process.

“It’s hard to imagine what people in the area are going through,” says UFCW Canada Local 401 President O’Halloran. “President Frost and I knew we had to do something to help the members. Recovery will take a long time, but we want our members to know we’re here to support them through this challenging process.”

Together, UFCW Canada Locals 401 and 1118 represent more than 30,000 Albertans in numerous sectors across the province.