According to a recent Statistics Canada release, the consumer prices rose slightly in the 12 month to September and remained unchanged from August at 1.2%. The annual inflation therefore at 1.2%, seems to be under no building pressures for now, but the increased household debt and the soaring prices in the real estate remain a great source of concern.

In the year to September, gasoline and electricity were the main upward contributors to inflation in Canada, offset only by the low purchase in motor vehicles, women’s clothing and mortgages.

The cost of electricity increased 6.0% in the 12 months to September after rising 3.4% in August. Ontario and Alberta were the two leading provinces.

Gasoline prices rose 4.7% in the 12 months to September. Compared to August, higher price increases were recorded in eight provinces, with Atlantic region topping them all.

Natural gas prices declined 14.2% in the 12 months to September, continuing a pattern of year-over-year declines since January 2011.

12-month change in the provinces 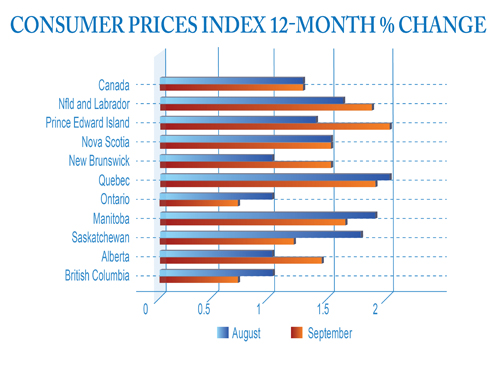 Consumer prices in Newfoundland and Labrador, Prince Edward Island, New Brunswick, and Alberta rose at a faster rate in September compared with August, due to the higher increase in the gasoline price.

Despite the accelerated increase in gasoline prices (3.6% in the 12 months to September), consumer prices grew at slower pace in Ontario, to 0.7% in September, from a 1.0% rise in August.

12-month change in the major components 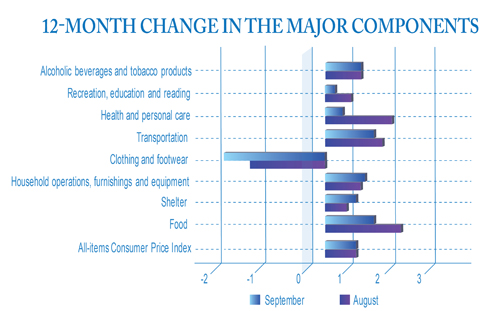 Prices rose in every major component except footwear and clothing.