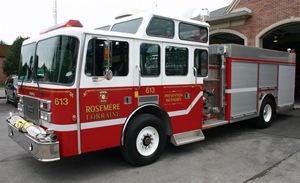 Rosemère, Que. – June 23, 2016 – UFCW Canada Local 501 members working as firefighters in Rosemère have received support from a local city councillor who has called out the Mayor and council for arbitrarily shutting down the local fire station.

Eric Westram announced at a June 13 council meeting that he would sit as an independent, after the Mayor and her allies decided to close the town's fire department without consulting local residents.

The decision to close the fire hall was made when the town council held a special meeting to ratify an agreement negotiated in secret with the Town of Blainville. In doing so, it deprived the large Thérèse-De Blainville regional county municipality of a fire station and equipment as well as the services of its 38 firefighters, who also specialized in rescue and emergency services along the Mille-Îles River.

Councillor Westram urged Rosemère Mayor Madeleine Leduc to bring transparency to the matter of the Rosemère fire station, citing other affordable solutions that could have been adopted instead of shutting down the fire station.

The firefighters in the hall applauded Councillor Westram's move.

"This is major support for us. We are very happy that a councillor has publicly denounced the Leduc administration's lack of transparency," says Rosemère firefighter and union representative Benoît Gauthier. "Since the surprise announcement that the fire station would be closed, we have been unable to get coherent answers from the mayor. And once the consolidated budget was tabled, we realized that her economic argument made no sense since the town posted a surplus of $2.1 million, and as Councillor Westram pointed out, that no other scenarios were considered. The only conclusion is that the mayor just does what she pleases, with no regard for democracy."