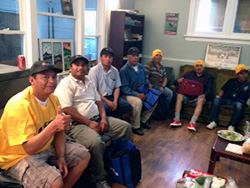 Leamington, Ont. – September 6, 2016 – Protecting the health and safety of agriculture workers was the focus of a recent workshop held at the Agriculture Workers Alliance (AWA) support centre in Leamington, Ontario. The workshop, led by AWA and UFCW Canada activists, provided workers vital information on the dangers and safe handling of pesticides.

More than two dozen migrant agriculture workers participated in the training about the health effects of prolonged exposure to pesticides, and how to protect against the dangers.

Workshop facilitators also provided information how to safely handle pesticides, including the mandatory requirements on employers to provide proper protective work gear, as well as other employer requirements under the Occupational Health and Safety Act (OHSA).

The workshops are just some of the vital services that AWA centres across Canada have provided to tens of thousands of migrant and domestic agriculture workers since the first AWA centre opened in Leamington in 2002.