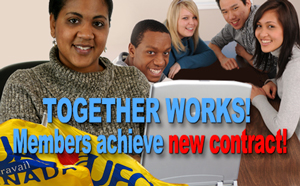 The new contract drastically reduces the amount of hours that employees have to work before obtaining dental benefits. New language has also been added to the agreement to improve workplace safety, particularly for overnight employees.

Members will also receive a signing bonus and off-scale wage increases of 25 to 30 cents per hour – dependent on the number of hours worked – in the second and third years of the agreement.