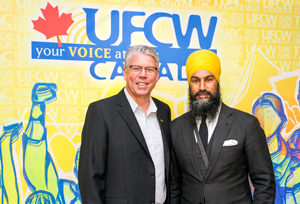 Toronto – August 29, 2017 – Canada’s leading private sector union, the United Food and Commercial Workers (UFCW Canada), announced today that the UFCW Canada National Council has made the decision to endorse Jagmeet Singh for the leadership of the New Democratic Party of Canada.

“Jagmeet Singh is the candidate who best represents the interests of UFCW Canada members from coast to coast. His continued dedication to social justice, and his drive to ensure the betterment of working Canadians are a part of the qualities that gave Jagmeet the advantage in the National Council’s deliberations,” says UFCW Canada National President Paul Meinema.

“The great qualities and strengths of all the other candidates made this decision very difficult, however, UFCW Canada leadership believes Jagmeet Singh is the leader who will help the NDP grow to new heights with a new generation,” adds the UFCW Canada leader.

“UFCW Canada is encouraging all member activists to be united and speak with one voice by supporting Jagmeet Singh as the next leader of the federal NDP.”

As Canada’s leading union for retail and food workers, the United Food and Commercial Workers Union represents over 250,000 workers across the country working in the food retail and processing, agriculture, health care, security, and hospitality industries, as well as other sectors of the economy. UFCW Canada is the country’s most innovative organization dedicated to building fairness in workplaces and communities. To find out more about UFCW Canada and its ground-breaking work, visit www.ufcw.ca/.