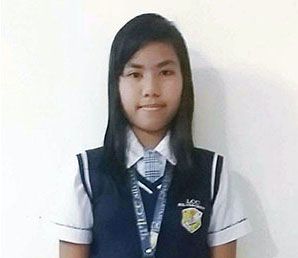 Toronto – October 14, 2017 – Ma Miela Fabito is one of 20 successful nominators for the 2016 UFCW Canada Migrant Workers Scholarship. Fabito nominated her 13-year-old daughter, Ericiela, as a recipient of the bursary.

Although Ma Miela has a university degree in computer science and computer engineering, she was not able to pursue work in her field due to a lack of opportunities in her home country. Instead, she worked in Taiwan as a temporary foreign worker with limited work visas. Ma Miela is the proud mother of Ericiela and her younger sister, Arianna, both of whom continue to live with their grandfather in the Philippines. As a single mother, she has found it necessary to work as a temporary foreign worker in order to support her family. From 2012 to 2016, she tried to provide for her family in the Philippines and opened her own general store for four years, but it was not successful and she found herself back in Taiwan to make ends meet.

Three months after arriving in Taiwan, she was hired as a temporary foreign worker in Canada to work in Prince Edward Island in the fisheries industry. Ma Miela entered Canada with a new temporary foreign worker visa that limited her work to 180 days. Once the season was finished, she was forced to await her employer’s decision on whether she could return to the fish plant for another season. Luckily, Ma Miela recently received a positive Labour Market Impact, and thanks to advocates such as Josie Baker – a past Agricultural Workers Alliance (AWA) award recipient and advocate at the Cooper Institute – she was able to navigate the Employment Insurance system to secure the funds needed to cover her rent in the off-season.

When asked about her thoughts on Canada’s Temporary Foreign Workers Program (TFWP), Ma Miela talks about the difficulties of precarious work, compounded by the uncertainty of the off-season. Ma Miela dreams of one day becoming a permanent resident in Canada and bringing her family with her to P.E.I. However, she won’t have a real shot at applying for permanent residency until she has full-time employment. Nonetheless, Ma Miela continues to persevere and believes that with hard work, a better life is possible.

Since 2010, Canada's union for migrant workers has received tens of thousands of applications for our renowned Migrant Worker Scholarship program, and has awarded scholarships to dozens of children to benefit their educational pursuits here and in their home countries.