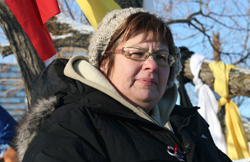 Ottawa – January 3, 2013 – In an open letter to the Prime Minister, UFCW Canada National President Wayne Hanley has called on Stephen Harper to meet with Chief Theresa Spence of the Attawapiskat First Nation, who has been on a hunger strike since December 11.

Stephen Harper can end the hunger strike by simply meeting with Chief Spence to discuss ways to improve relations between the federal government and Canada’s Aboriginal communities.

The following is the letter sent by National President Hanley to Prime Minister Harper.

On behalf of the 250,000 members of UFCW Canada, Canada’s largest private-sector union, I urge you to meet with Chief Theresa Spence of the Attawapiskat First Nation within the next 72 hours to bring about an end to her hunger strike and to open dialogue to address the concerns of Canada’s First Nations communities.

The decision to undertake a hunger strike by Chief Spence was not made arbitrarily but rather out of frustration with the government’s continued neglect in addressing the concerns of Aboriginal Peoples throughout Canada.

The housing and education crisis in Chief Spence’s community of Attawapiskat is well known but it is not unique.  Over 120 First Nations communities are living under boil water advisories.  One in four Aboriginal children live in poverty and suicide rates among Aboriginal youth are among the highest in the world, 11 times higher than the national average.  Furthermore there are 600 unresolved cases of missing and/or murdered Aboriginal women in Canada without a public inquiry being called.

Prime Minister, our Aboriginal communities are in crisis and the time to act is now.  Without meaningful dialogue and action, the problems mentioned – and others – are not going to go away.  Again, I urge you to meet with Chief Spence and other First Nations leaders so that justice for Aboriginal peoples is done.