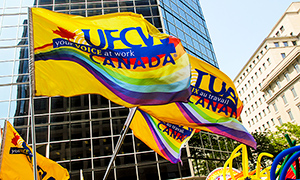 Toronto – May 24, 2018 – Once again, UFCW activists across the country are preparing for another fun and colourful Pride season. All UFCW Canada members, as well as their family members and friends, are encouraged to join their local union at Pride parades and events throughout the summer.

In 2017, UFCW Canada’s National Office and Local Unions participated in over 28 Pride parades from coast to coast, and also supported Pride celebrations in the U.S. through the UFCW OUTreach constituency group.

This year, we will be increasing our Pride efforts with UFCW Local 175 and UFCW Local 1006A’s sponsorship of the Identity: Canadian Perspectives on LGBTQI2S Inclusion conference in Toronto. In support of our national partner, Egale Human Rights Trust, the conference will engage stakeholders in discussing pressing LGBTQI2S issues and will explore the various ways that governments and advocacy groups are working to advance LGBTQI2S rights.

Below you will find a list of parades, events, and festivals taking place in major cities across the country this Pride season. UFCW Canada Local Unions participate in many of these events, so check with your Local Union. We hope to see you out loud and proud for this year Pride season!