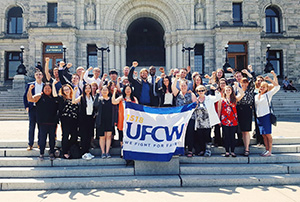 The event kicked off with a four-hour workshop for executive board members, activists, and stewards to train participants on how to engage with government officials.

“It’s been a year since the provincial election, and we wanted to meet with the new NDP government and commend them for the important changes they’ve made for working families,” says UFCW 1518 Executive Assistant Patrick Johnson. “What better way to do that than to meet with ministers and MLAs and carry forward the message that, while we are encouraged by the progress that’s been made, there is still a lot of work to be done?”

About 20 ministers and MLAs attended a meet-and-greet co-hosted by the Retail Action Network, a group of retail workers and labour activists that fights for workplace justice and improved labour conditions in the retail sector.

“It was an incredible opportunity for members to meet and chat informally with politicians, who make policy decisions on important issues like poverty reduction and the Labour Relations Code,” says UFCW 1518 Secretary-Treasurer Kim Novak. “And it helped nurture relationships between our union and the current government. That is simply invaluable.”

In total, members and leadership sat down with 13 ministers and MLAs, including Harry Bains, the B.C. Minister of Labour.

“Creating opportunities to connect with political leaders is essential if we want the government to address issues affecting working people,” Novak explains. “Minister Bains understands the complexity of the ongoing Sobeys dispute, the difficulties it is causing for our members, and the potential negative impact on our economy. And he is open to hearing from workers.”

Danielle Stohl, a care aide who works at Nanaimo Home Support, says she was honoured to represent UFCW 1518 in her meeting with Leonard Krod, the MLA for Nanaimo. “We have so many problems at work and in our community. Leonard is my MLA and I was able to tell him about those issues face to face, which was amazing.”