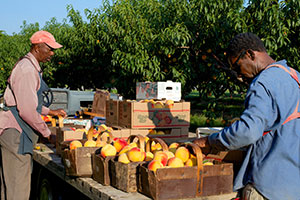 Despite the current legislation – which has proven insufficient in upholding the labour rights of agriculture workers in Ontario – UFCW has continued to act as a primary advocate, representative, and resource for workers in the sector. Through outreach programs, we continue to deliver information on labour rights and health and safety training to workers in the sector. Recognizing the large number of seasonal agricultural workers that come to Ontario every year under foreign worker programs, UFCW Canada has developed specific programs to provide assistance and support to these workers.

UFCW Canada is also seen by the federal government as an ongoing principal stakeholder and consultant on matters regarding agriculture and food policy, as well as labour force issues and temporary and foreign workers programs.

Recently in Ontario, we have also provided a safe haven and resource to a number of migrant workers who were ensnared and exploited through a human trafficking scheme servicing the agriculture industry.

Our advocacy and representational efforts commenced two decades ago, with the UFCW Canada research initiative known as “The Global Justice Caravan Project,” which in 2001 toured the province to interview workers. This initiative resulted in the Report of Migrant Farm Workers in Canada – 2001.

The Report summarized the poor working conditions of migrant farm workers – including long hours of work, deplorable housing conditions, language barriers, social isolation, low wages, and a lack of legislative protections. Despite these working conditions, migrant workers continue to travel to Canada to earn a living. There is no safe place for these workers to raise their concerns. As the report states: "They believe voicing their concerns over living and/or working conditions to either their employer or Consulate Labour Liaison Officer can result in repatriation or blacklisting from participation in next year's program.”

In December 2002, UFCW Canada, together with the Canadian Labour Congress (CLC), produced the National Report: Focus of Migrant Farm Workers in Canada (the "National Report") on the status of migrant farm workers, which detailed many of the abuses of migrant workers and problems inherent in the policies and operation of the SAWP.

Subsequent to the National Report, UFCW Canada continued to produce annual reports that monitored the status of farm workers in Canada. Four years later, The Status of Migrant Farm Workers in Canada 2015 report detailed that little had changed: that this mostly invisible workforce, hidden away in rural communities, is left vulnerable to exploitation, health risks, and reprisals because of legislative and regulatory regimes that hobble the ability of Ontario agriculture workers to organize. This continues today.

As the only viable sector partner, UFCW Canada has led the way for over two decades as a representative voice for Ontario agriculture workers and has established itself as the most authoritative and devoted labour body in advancing and protecting the rights and safety of farm workers in the province. This includes providing both community and on-line resources regarding health and safety, workplace rights and more, as well as advocacy and representation regarding the treatment and regulations covering agriculture workers.