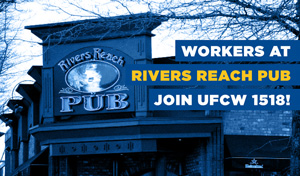 New Westminster, B.C. – May 13, 2019 – Hospitality workers at River’s Reach Pub in New Westminster, British Columbia are the newest members of UFCW Canada Local 1518 after recently voting to join the union. The neighbourhood pub has been serving up burgers and beer since 2000 and is a favourite gathering spot among area residents.

“For the workers at River's Reach, bringing in the union was about fairness and respect. They got in touch with us because they knew we could help,” says UFCW 1518 Secretary-Treasurer Patrick Johnson. “The hospitality industry is notoriously precarious and largely non-unionized, making it difficult for workers to find stable employment.”

“Without the strength of a union behind them, restaurant workers are on their own,” Johnson adds. “There are basic protections under the Employment Standards Act, but its up to workers to file and pursue a complaint if an employer breaks the law. With a union, we’ve got your back.”

Last week, the B.C. NDP announced amendments to employment standards that strengthen protection for workers, including a ban on employer theft of tips. Still, the standard of legal protection is lower for non-unionized workers. “When you stand together to fight for better wages and working conditions, you are stronger. It’s that simple,” Johnson continues. “And when we bargain the first collective agreement for River’s Reach, it will be as a united group focused on fairness.”

President Kim Novak welcomed UFCW 1518’s newest members: “We are thrilled to represent the workers of River’s Reach Pub and look forward to helping them achieve the fair compensation and respectful working conditions that all workers deserve.”

To read more about the organizing victory at River's Reach Pub, click here.