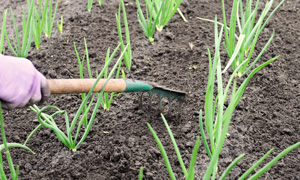 Sainte-Mélanie, Que. – August 1, 2019 – With the help of UFCW Canada, a Mexican farm worker has become the first migrant worker in Canada to be granted an open work permit after experiencing abuse from his employer while working at an onion farm in Quebec.

Mr. Perez, whose name has been changed, has been working in Canada for the past ten years under the Seasonal Agricultural Worker Program (SAWP). For the last two years, he was experiencing psychological and financial abuse by his employer. Mr. Perez was constantly insulted and threatened while working outdoors and did not have protections such as a hat and sunglasses, or adequate health and safety training. He also was not permitted to take breaks or drink water.

“The employer was very aggressive and racist,” says Mr. Perez. “He was using binoculars to monitor us at all times, and you couldn’t even take a break. Harvesting onions is not an easy task, as you work deep in the mud. The boss constantly embarrassed and yelled at me in front of my co-workers. He told me that Mexicans are lazy and that I would be sent back to Mexico. I felt very stressed and anxious,” he adds.

One day, after falling ill and being chased down a field by his employer, Mr. Perez decided to leave the farm. He then contacted UFCW Canada Local 501. By providing moral support, gathering all documentation to support his claim, helping to submit the online application, and accompanying Mr. Perez during an interview with Immigration, Refugees, and Citizenship Canada, UFCW was able to help Perez obtain the first-ever open work permit in Canada. The permits were introduced in June 2019 and are available to migrant workers experiencing physical, sexual, psychological, or financial abuse from their employer.

“After decades of advocacy by UFCW Canada, the federal government has finally introduced protections for those experiencing abuse from unscrupulous employers,” says UFCW Canada National President Paul Meinema. “It is the government's responsibility to protect migrant workers labouring in Canada, and Mr. Perez is the first to benefit from an open work permit that will help him escape conditions of abuse,” the UFCW leader adds.

“We have witnessed a pattern of abuse of migrant workers, due to their lack of labour mobility, language barriers, and geographic and social isolation,” says Alain Lachaîne, President of UFCW Local 501. “We strongly believe that every worker deserves to be treated with respect and dignity at work, no matter where they come from, so we were gratified to be able to help Mr. Perez obtain the first-ever open work permit,” he adds.