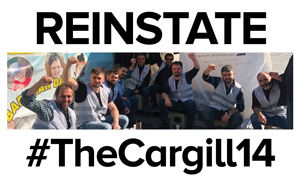 Toronto – August 16, 2019 – Calling all UFCW Canada activists and allies: your urgent support is needed to help stop the union-busting tactics of global meat giant Cargill, who is punishing workers for expressing their democratic right to join a union.

Since early last year, fourteen union activists have been continually protesting after being unfairly dismissed from their jobs in April 2018 while organizing a union at Cargill Turkey's corn milling facility in Bursa-Orhangazi.

This is not the first time that Cargill management in Turkey has fired workers for attempting to exercise their rights. In 2015, a court ruled that workers were unfairly dismissed for trying to organize a union at the same plant. Turkey's legal system, however, offers an escape route: as an alternative to reinstating workers who are sacked for forming or joining a union, companies can pay compensation. Cargill opted to pay for its human rights violations rather than reinstate the victimized workers.

Cargill has been repeatedly informed of these blatant rights violations by the International Union of Food, Agricultural, Hotel, Restaurant, Catering, Tobacco and Allied Workers' Associations (IUF) and its affiliates with Cargill membership, including UFCW Canada. And a local Turkish court ruled in July that workers at Cargill's Bursa-Orhangazi factory were dismissed solely as a result of their union activity. The company, however, has failed to take any meaningful action to remedy the abuses.

Together with UFCW Canada and the IUF, the international labour movement is therefore calling on Cargill to immediately reinstate the fourteen workers dismissed last  year with full back pay. We are also urging the company to ensure that all workers at Cargill Turkey can freely exercise their right to join a union going forward.