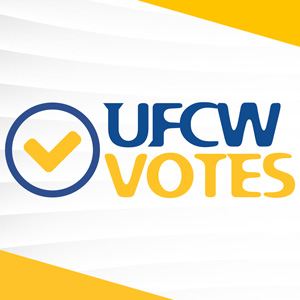 Toronto – September 13, 2019 – With the 2019 Federal Election campaign now underway, UFCW Canada has launched a new resource aimed at helping members and their families explore the key issues facing working people in this election, and learn more about where the parties stand on child care, the economy, retirement security, and more.

Called “UFCW Votes,” the new resource encourages UFCW Canada members and their family members to vote on the issues that matter most to working Canadians – including Good Jobs and the Economy, Retirement Security, Pharmacare, Dental Care and Child Care, and Combating Climate Change.

UFCW Votes also features video interviews with political party candidates, social media memes and infographics, and a discussion of why, when workers unite their votes, we can be better together.

To view the new UFCW Votes resource, and to learn more about the key issues in the 2019 Federal Election, click here.

“On October 21, UFCW Canada members and family members can help build a brighter future for all Canadians by voting for what matters most,” says Paul Meinema, the national president of UFCW Canada. “That includes the big issues affecting working families across the country – like child care, pharmacare, and how we can help more workers retire with dignity.”

“Our union is asking members and their families to consider these important issues when casting their ballot in this election, and to ask the candidates where their party stands on these topics,” the UFCW leader continues. “By making our voices heard and getting out to vote, UFCW members and family members can have a huge impact in building a Canada where no one is left behind.”

With the rise of fake news outlets and hateful speech online, UFCW Canada is also encouraging members and their families to verify the sources and facts of any material they read, watch, or share online, and to exercise caution when engaging with content surrounding the election.

As Canada’s leading union, UFCW Canada believes that political action is essential to achieving a better life for workers and their families. Our union takes politics seriously because the decisions made by political parties and elected officials impact UFCW Canada members in their workplaces, homes, and communities. To learn more about our union’s work in the political realm, visit the UFCW Canada Political Action webpage.