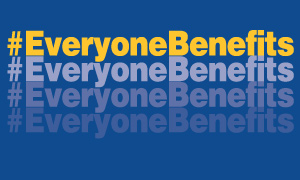 Toronto – September 24, 2019 – In June of last year, the Parliament of Canada gave Royal Assent to Bill C-309, which designates the fourth week of September as Gender Equality Week. This year’s theme is #EveryoneBenefits, a message from Status of Women Canada that focuses on achieving fairness, economic prosperity, health, and happiness as aspirational goals for realizing gender equality.

While these goals are indeed worth pursuing, the reality for women experiencing sexual violence in Canada, for example, is far from fair. Recently, the Supreme Court of Canada ruled under R. v. Goldfinch (2019) that “friends with benefits” evidence was not relevant to sexual assault. And while the court decision was favourable to the accuser, the complainant faced recanting details of the assault numerous times in court and was subjected to cross examinations. The accused, on the other hand, argued that consent was granted on the basis that they were “friends with benefits.” That is one reason why the Women's Legal Education and Action Fund (LEAF), UFCW Canada’s organizational partner, continues to advocate against stereotypes that encourage misogynistic bias in our society and our justice system.

When we talk about gender equality, or inequality, we do not have to look further than our daily lives. For example, did you know that Canada has the eighth highest gender pay gap out of forty-three countries examined by the Canadian Women’s Foundation? And while we have a situation where we can now find Viola Desmond’s face on our $10 bill, and an image of the Famous Five on our $50 bill, the unjust money reality for non-unionized women is that on average, they earn only about $0.75 cents for every dollar earned by men doing comparable work.

To truly address societal inequality, it is also vital that we use a gender lens to eliminate the stereotypes and biases that continue to stifle substantive equality for all women – including racialized women, women with disabilities, Indigenous women, and LGBTQI2S persons.

Gender Equality Week  is an opportunity to acknowledge the good work being done to close the many gaps and break down the barriers that exist for women in Canada. More importantly, it is also an opportunity to raise awareness of the inequalities that persist and the ways that each of us can work towards achieving real gender equality.