Politics Blog: The Green Party is not ready for prime time 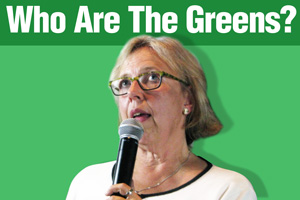 Toronto – October 1, 2019 – As Canadians become ever more concerned about climate change, Elizabeth May and the Green Party have been getting more attention from voters. But a closer look at the party reveals that, in addition its dizzying array of flip flops, the Greens have little to offer outside of the climate arena and are not ready for prime time.

As one example, the Green Party recently compromised voters' personal information by making it temporarily visible in internal training videos that were publicly accessible on the party's website. Ironically, this incident happened on the same day that Ms. May unveiled the Greens’ platform on privacy at the University of Waterloo.

It is also difficult to understand where May and the Greens stand on certain issues. For instance, earlier this month May said that if she was prime minister, she would not prevent Green MPs from reopening the abortion debate. This was followed by a party statement claiming that such a scenario would never arise under a Green government. So, which is it?

Meanwhile, Pierre Nantel, a Montreal MP who was kicked out of the NDP in August when it was discovered that he was trying to switch parties, recently proclaimed that he is a proud sovereigntist and urged Quebecers to separate from Canada. May insists that Nantel is not a separatist, but it doesn’t seem like the Greens are taking the issue too seriously, as the party told the Toronto Star that national unity is not one of their core priorities.

Another NDP defector, Jonathan Richardson, who was the federal NDP’s executive member for Atlantic Canada, defected to the Green Party citing racism as the reason why the NDP couldn’t secure more candidates in the region. Although May said there wasn’t any room for racism in the Green Party, she gladly accepted Richardson and other defectors into her camp, and didn’t appear to be bothered by the fact that some of these defections were possibly motivated by intolerance towards NDP Leader Jagmeet Singh.

Then, when Justin Trudeau’s “brownface” story materialized, May retweeted a post suggesting that Canadians should focus more on climate change, rather than having a serious, national discussion about the hurtful images that emerged.

Questions are also being raised as to whether the Greens think diversity and inclusion are important, as only 12 percent of Green Party candidates are visible minorities in this election. By contrast, 32 percent of NDP candidates come from diverse backgrounds.

Jagmeet Singh, leader of the federal NDP, has stated that “what we need now is the courage to act together.” The New Democrats are promising to do exactly that on big issues like climate change, income inequality, immigration, and health care. And unlike the Greens, the NDP has a proven track record in government. That is why the New Democrats are the true progressive alternative in this election.