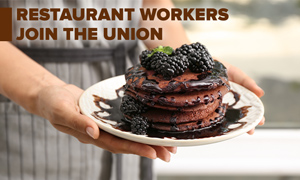 Montreal – October 23, 2019 – Restaurant workers at the Juliette & Chocolat restaurant and chocolate shop on Monkland Street in Montreal are the newest members of UFCW Local 500 after saying “Yes!” to joining the union.

A request for certification was filed by the Local Union in late August and was recently confirmed by Quebec’s Administrative Labour Tribunal. This is the first group of employees at the Juliette & Choclat chain to join UFCW – Canada’s union for food workers.

“It is undeniable that the recent upheavals in the broader food sector motivated these workers to obtain a strong voice at work,” says Antonio Filato, President of UFCW 500.

"UFCW 500 enthusiastically welcomes this new group of workers to our great organization. By deciding to join forces with the 35,000 members of UFCW 500, these new members are leading the way for their colleagues at other Juliette & Chocolat locations, who also want to improve their workplace,” he adds.

To read more about the union victory at Juliette & Chocolat, click here.

UFCW Local 500 represents more than 35,000 members working at over 650 businesses across Quebec. To find out more about the outstanding work of UFCW 500, visit the Local Union's website.