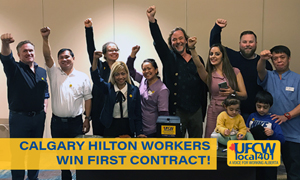 Calgary – February 15, 2020 – UFCW Local 401 members working at the Homewood Suites by Hilton Calgary Downtown hotel have achieved a new union contract that provides wage gains, better benefits, and a new floater day. The ratification vote came nearly two years after the Alberta Labour Relations Board ruled that UFCW 401 be certified as the hotel workers’ official bargaining agent after an employee was fired for their support of unionization.

“This is an important symbol for Alberta hotel workers who might want to unionize,” says UFCW Local 401 Secretary Treasurer Richelle Stewart. “If you want to form a union, we will help you do that. And if you do, even though it is a risk when employers break the law, we still will do everything in our power to ensure you get a dignified first union contract,” she adds.

Highlights of the first collective agreement include:

“As a union, we are committed to member-driven and transparent negotiations,” says UFCW Local 401 President Thomas Hesse. “That practice is what enables people to fight their own fights, with a union by their side, and win on their own terms. This contract is a spectacular example for all working Albertans who are seeking and deserve a better life,” he adds.

To read more about the new union contract at the Homewood Suites by Hilton Calgary Downtown, click here.

Are you a non-unionized worker who would like to enjoy the benefits of a UFCW Canada collective agreement? Do you and your co-workers want to gain the union advantage at work? Join Canada’s best union, UFCW, and make your workplace better today. Click here to join now.